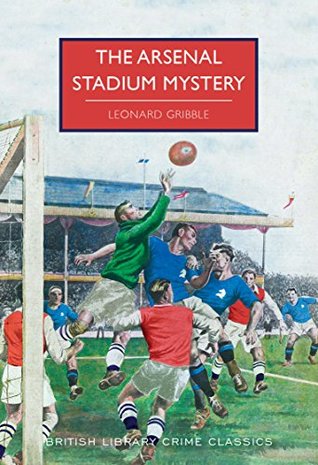 Murder mystery enters the world of English football in this 1939 classic.

In a high stakes final between a team of amateurs and the Arsenal side of 1939, a player drops dead on the pitch shortly after halftime. It’s up to Detective Inspector Slade to unravel the multiplicity of motives and suspects behind this case of the foulest play possible.

Rating: A rather dull 0:0 draw

When Jack Doyce collapses during a football match and dies not much later it doesn’t take long to discover that he was murdered. And a suspect appears just as quickly: Phillip Morring was Doyce’s business partner. His death means Morring receives a large sum of money from the life insurance. They were on the football team together, so Morring had the opportunity to poison him and when Slade discovers that Morring’s fiancée was having an affair with Doyce it seems that everything fits together perfectly.  But Slade isn’t fully convinced, especially after he finds out that Doyce was implicated in a tragedy that happened a few years back. Is someone taking revenge? But the evidence against Morring is piling up as well, so is perhaps the most obvious solution the right one after all?

The mystery itself is solid and keeps you guessing. It does require some suspension of disbelief (among other things, the plot only works because a girl told nobody whom she was getting engaged to, not even her own father) but not more than in the average golden age mystery.

In a solid mystery, I can usually excuse bland detectives and Slade is very bland. (How bland? you ask. Well, on Goodreads his name was mistakenly given as MacDonald and I had not noticed that and happily called him as MacDonald in this review until I looked up a quote in the book and saw that he was in fact called Slade). And with the exception of Pat Laruce – Morring’s fiancée – so are most side-characters. They are in fact, for a mystery novel, surprisingly sensible. Morring, for example, immediately tells the police about the fact that he gains a lot of money from Doyce’s death. He is slightly less forthcoming about his fiancée but once he realizes that the police know, he comes clean immediately – and so do most other characters in similar situations. Only Pat, the already mentioned exception, is as unhelpful as possible and has her own agenda. As such she’s more like a character one is used to from mysteries but next to all the others, she appears more like a comical caricature.

Then there’s the football connection which felt forced. The victim is a football player who died during a match. But he could just as easily have been killed during a weekend country house party.  Neither the football nor the cameos by Arsenal players and the manager added anything to the story. Perhaps you have to be a real football-fan for that and care a lot about Arsenal (and its 1939 team) to get anything out of that and with my casual ‘I pay some attention to the German league table and am happy when certain teams are in the upper half’ attitude it didn’t really work.

Epithets. So many of them. Any character who appears more than one will have an epithet that gets used frequently. I have spent too much of my teenage years reading bad Harry Potter fanfiction full of the dark-haired boy, the blonde man, the Gryffindor star-pupil and the boy who could talk to snakes* and now I am very allergic to epithets of all kinds.

All in all, I think this book might be interesting for people who are very interested in football history. The rest can easily miss it.

*I am not suggesting that only one fandom has this problem. Or even only fanfiction, as this book proves. But that’s where I got my overdose of this particular bad style-advice